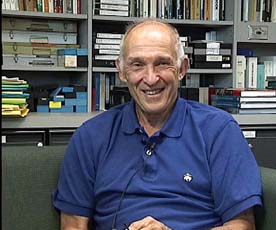 Since 1966, Dr. Greenberg has been researching and teaching in the field of computer graphics. During the past 30 years, he has been primarily concerned with research advancing the state-of-the-art in computer graphics and utilizing these techniques as they may be applied to a variety of disciplines. He has taught courses in computer graphics in Computer Science, computer-aided design in Architecture, computer animation in Art, and technology strategy in the Business School.

His current computer science research projects involve realistic image generation, parallel processing algorithms for rendering, new graphical user interfaces, and computer animation. His recent application research projects include ornithology and the search for the ivory-billed woodpecker, medical imaging and virtual surgery, architectural design for a green environment, and new types of computer displays from electronic paper to touch sensitive table displays. All of this research occurs at the Program of Computer Graphics at Cornell University.

Working with the General Electric Visual Simulation Laboratory, he produced a sophisticated computer graphics movie, "Cornell in Perspective" as early as 1971. He is the author of hundreds of articles on computer graphics (including two published in Scientific American, May 1974 and February, 1991, both of which have been highly publicized); and he has lectured extensively on the uses of computer graphics techniques in research applications.

He served as the founding Director of the National Science Foundation Science and Technology Center for Computer Graphics and Scientific Visualization until his term expired on July 1, 1995. This five-university consortium included Cornell and Brown Universities, the California Institute of Technology, the University of North Carolina, and the University of Utah. He was also the originator and former director of the Computer Aided Design Instructional Facility at Cornell University.

Dr. Greenberg joined the Faculty of Cornell in 1968 with a joint appointment in the Departments of Architecture and Structural Engineering. His prior education consisted of both the architecture and engineering disciplines at Cornell University and Columbia University. From 1960 to 1965, he served as a consulting engineer, and was involved with the design of numerous building projects including the St. Louis Arch, New York State Theater of the Dance at Lincoln Center, and Madison Square Garden.

Of his hundreds of graduate students, many have gone on to become leaders in the fields of computer graphics, computer animation, and computer-aided design for architecture. In addition to many current faculty, eleven former students have won Hollywood's Technical "Oscars," and five have won the prestigious Siggraph Achievement Award.

In June of 2005 Dr. Greenberg, '55, was honored during his 50th Reunion by the production of a film, "True Big Red" by Maddy and Phillip Handler, profiling his lifelong involvement with Cornell.